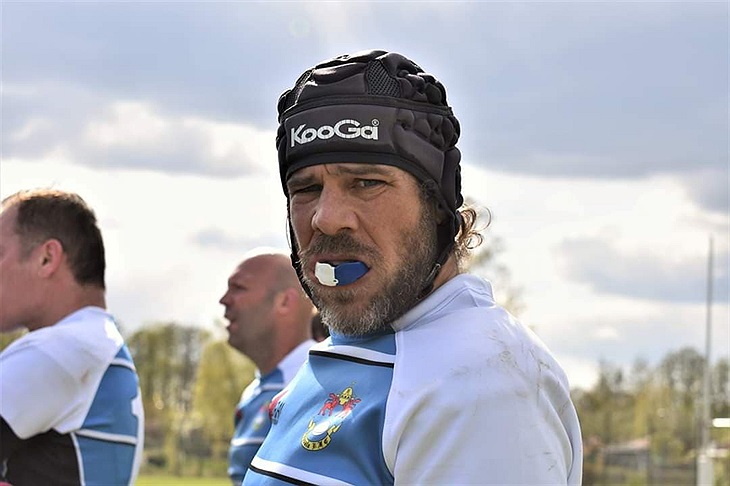 The game that had been 8 months in the making was finally here. Uppsala kicked off their campaign against the ever growing and improving side from Erikslund.

As the team got into their brand-new strip, you could hear a pin drop, such was the level of focus within the 23 who got the task of representing URFC in the first game. As warm ups took their way, not a word was spoken, not a ball dropped, or an assignment missed. There were no nerves nor tension, just focus and will. A will to win.

When the brilliant referee Nils, a 16-year-old, blew the whistle, Uppsala received and immediately began driving into Erikslund. Thus far it looked promising but we all knew the real test would come in the scrum. The chance came within 3 minutes and as both packs got down, the long-awaited crouch… bind… set(!) was echoed and Uppsala´s pack drove Erikslund into a penalty. Uppsala have been focusing a lot on the mechanics of the scrum and techniques of the individual components, so it felt like those many hours in the tundra were vindicated there and then.

If waiting was the gunpowder to the cannon that is a rugby match, Justin proved to be the ignition that fired a barrage of tries after 15 minutes to make the score 21-0. What followed was a period of aerial ping pong and some experimental playing from the home team. It was refreshing to see the backs and the forwards beginning to gel with each and play an interlinking, free flowing form of attack. Jorge, our newly returned hooker, said ´the best player on the team is your teammate´ and whilst this might sound like a strange saying, the guys played a trustful and selfless brand of rugby that hasn’t been seen of a Plebs team for many years. The aforementioned Mexican even managed to sneak in a try with 5 minutes to go, albeit with Erikslund dealing with a man in the naughty boy chair.

If little has been mentioned about our defence is because the scrum consistently turned over the opposition scrum and Hampus and Vilhelm wouldn’t stop stealing their lineouts. This was in large part thanks to our mighty King´s solo lifting on the front pod that gave him more air than Jordan. The bittersweet moment came during a particularly heavy tackle from Albin H, who suffered a game ending ankle sprain that will see him miss action for a few weeks. Jeremy Shore came on and the blue machine kept trucking.

The second half saw the tireless Sela make way for Brian, who rudely stole the show with consistent carries, all breaking the gain line and gaining metres as well as grabbing a brace of tries. To correct the record, it was two Irishmen who stole the show, as Gerald pulled back the years and controlled the midfield with an eloquence usually reserved for the highest standards of rugby. His 3 carries went from more than 40 yards apiece and that seemed to deflate the opposition as a further 5 tries were scored. None was cheered more loudly than when Per´s scored his first every try for plebs, dotting down after a 20-metre run with at least 3 players clinging onto his jersey.

The team was superbly led by Stewart Devine, accurately kicked by Lukas and MOTM´d by Wilhelm. We are still trying to determine where Wilhelm played due to him scrumming, jumping, tackling, linking and generally being the crucial linkman in the forwards or backs. A superb reading of the game by our man from France, who always seems to grow with the occasion.

Seeing the guys not selected for the match day squad turn up to support, shows the team bond that we have and it really helped motivated those on the field.

An extra thank you goes to Susanna Shore-Reid for taking photos of the game, To Chris Greenland for taping the game and most importantly to you, the reader, the fan who turns up to the games to support us.