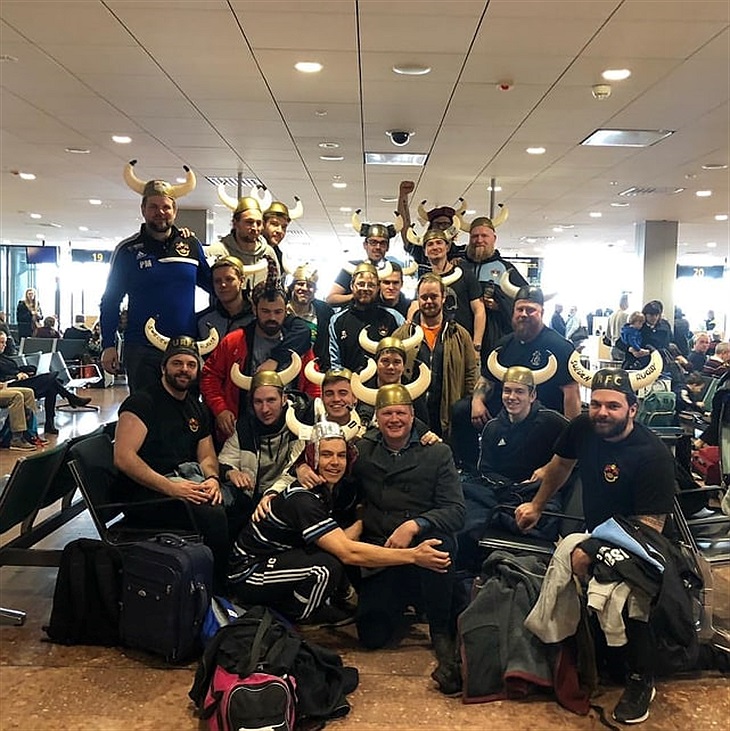 Setting off on Friday morning, it felt the first Viking invasion of Ireland, when coach Devine loaded 26 Viking Plebs (including 2 Sandvikens) aboard the Norwegian vessel that jettisoned the team to Dublin. These hardy warriors, finely dressed in authentic Viking helmets, then proceeded on to St. Mary´s Rugby Club, where they hoped to lay siege to a team that has produced at least 25 Ireland international players including current internationals Johnny Sexton, Jordan Larmour and Sean Cronin.

Arriving in good time, the team started to get acclimatised by holding a training session to fine tune the pillars of our game; scrums, lineouts and set moves before descending upon the village Templeogue for a feed before returning to prepare for the game.

The game itself would be a first for many in terms of playing under the floodlights at night. The St. Mary´s team showed an overwhelming touch of class and friendship seemingly reserved only for Rugby when they formed a tunnel and clapped the touring Vikings out onto the field. From then on it turned into what encapsulates every rugby game; a bruising clash of indomitable physical wills played in the best of spirits. The first 20 minutes were all St. Mary´s in terms of attack, but Uppsala were led by Hampus Wahlander and Anton Johansson who put in a huge defensive effort. St Mary’s managed to score in the corner after a kick through but this only helped galvanise our team.  St. Mary´s were forced into errors and with the quick thinking of Axel Renard, -spoiler alert- our man of the match, to dummy and run for the line, a supporting Gustav scored what is probably the first score on Irish soil by a Pleb (and Sandviken) player EVER!!!!

We lost our inspirational captain and coach to a devastating blow to the head in the early exchanges and on came Javier, who proceeded to score two outstanding tries during the game. In his excitement he claims to have ´forgotten´ to buy a beer for the team, as is tradition when scoring your first points for the club. All the boys are looking forward to enjoying a beer on Javi after our first league game on the 5th May.

The second half brought a complete change in the forwards as we travelled with 16 eligible players. Lots of guys got good game time and we were able to try out some players in different positions. We had a lot of novice players on the pitch combined with fan favourite Peter Berglund and the experience of Nils H and Jeremy.

Throughout the game our experienced players lead well by example and St Marys had a lot of praise for all our guys at the end. Anton even got himself on the score sheet after some great footwork and speed to run home from the halfway line. Some standout moments were also provided by Per who managed to both throw an outrageous dummy and run through a gap as well as completing a pass as daring as a Sonny Bill Williams offload and Justin managed to disguise a drop goal to look like a cross kick!

The final score wasn’t important. Our victory laid in getting everyone quality game time, sticking to the system we have been coached, thinking clearly under pressure and making the right decisions based on what’s in front of you. Success!! We also beat them at the 10-man boat race in the bar afterwards!!!

The social chapter of the tour included a visit to the RDS stadium to watch Leinster take on Glasgow. We are told the chippie at the North Stand ran out of beer and food. Apparently, some gentlemen in Viking hats had a lot to do with it. That evening was juicy, and full of gossip and BREAKING NEWS CENSONRED WHAT GOES ON TOUR STAYS ON TOUR TRANSMITION INTERRUPTED which was a perfect way to end the day.

Sunday saw many a lot of heavy-eyed Vikings visit the Guinness factory in an attempt to reawaken the ´black beard´ thirst´, as the nateevs called it. Perplexing read, so we shall explain; black beard = black beer = Guinness and Nateev = native = local. For those endearing terminologies, and many more, we thank our linguist Javier.

The real testament of this tour wasn’t as much what happened on tour, but what happened when we returned. After what can only be described as a long social weekend, the boys returned the next day ready to train and continue building for the season.

A great weekend of rugby and team building was had all round, and we sincerely hope that we don’t have to wait another 8 years before the next tour!

A huge thank you to St Marys for your friendship and sportsmanship and we look forward to the return match come Autumn in Uppsala.